The defense slides are the most important slides of the deck. These are the slides you need to show and cover during the defense section of the defense itself. I’ve seen a lot of different layouts and there are many variations around, just make sure you feel that it delivers the message you want to come across and address any discovered faults or perceived knowledge gaps.

The only thing you need to make sure is to cover the main sections of the design to be able to get the questions needed from the panelist. You will not get a network question and thus no additional scoring if you basically skip the networking part. You will need to score enough in each of the section stated in the VCDX blueprint.

I can’t emphasize enough that you should be able to cover the necessary slides in 15 minutes (20 min max). Its better to cover them and have extra slides ready in case you had time left on the clock. That doesn’t mean that you will go through them in 15 min in the defense, most likely you will be finishing the last slide on the 74th minute.

As an example, this was my personal slide deck layout (I took the DCV path. A Cloud deck would be totally different) of the first part:

You get the drift. I just wanted to touch on every section in the blueprint to get any questions from the panelist.

As for individual slide layout I had a large Image on side of the slide, with text on the other side and large enough to be read from a small projector. Each slide had navigation buttons, both for internal navigation and to navigate quickly to the Deepdive Catalog slide or the Defense Catalog slide. Everything I wanted to emphasize on (and make the panelist see first) was in bold letters.

I’ll use a demonstration Network Logical Design slide as an example: 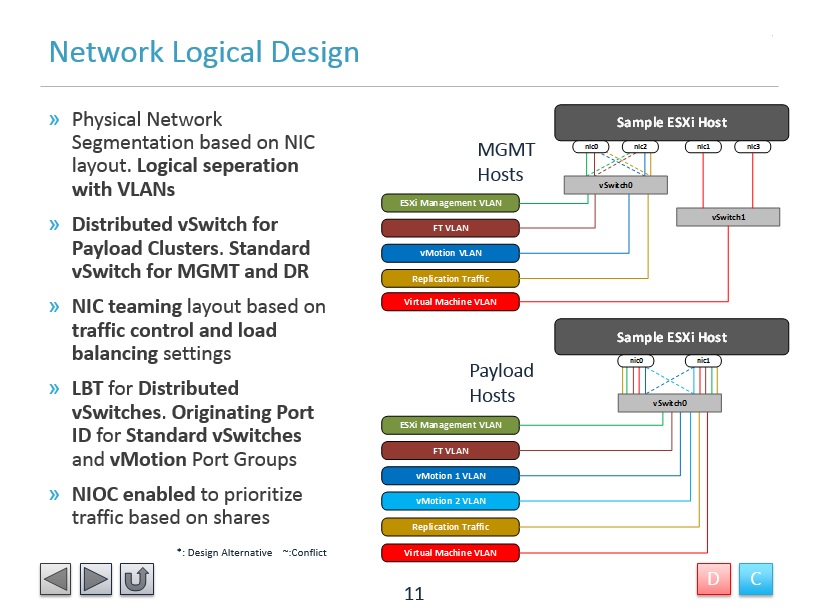 Also each slide had small visual queues just for me in form of a * and ~ which represented if the design decision behind that had a design alternative or a design decision conflict. I did not mention any of these unless actually asked on the subject.

Number each slide and learn the numbers for even faster navigation between slides. [Number+Enter] sends you to the number you selected in PowerPoint.

Ps. I want to add that the diagram idea in this slide are from VMware’s SET’s. I like the simple things, and colors :).

Back to Presentation Layout