Networking skills were not my strong side to say the least. This was the topic I needed to spend the most time on by far before the defense date.

Ps. You should in no circumstances call network routing, a Routing Packages Stuff Event…

And as before, how can these impact my design qualities?:

To give a little overview of my current skill level at that time, I had taken the CompTIA Network+ exam 4 years ago so I had a basic understanding around networks and how they work. But that wasn’t enough since I did not know exactly what STP can do to a vSphere host, or how specific routing protocols can impact vSphere environments (well all environments but specifically vSphere environments in this particular case).

Here are some examples of the questions/answers:

In classical ethernet, if you configure Spanning Tree, what is the impact?

Get rid of switching loops by discovering the topology of the network by sending out BPDU frames. STP is used to accomplish a loop-free environment. Every time a port state goes up, STP calculation occurs. As the result of the calculation, the switch ports are either set to a forwarding or blocking state to prevent a traffic loop. STP topology convergence has four states:

When STP convergence is initiated it forces all of the physical switches in the STP domain to dump their forwarding tables and relearn the STP topology and all MAC addresses. This process can take between 30-50 seconds. During this time, no user data passes through the port. Some user applications can time out during this period. Connectivity is restored when the STP domain completes this convergence. The main impact is BANDWIDTH since all but one port is blocked.

What are BPDU packets?

Bridged Protocol Data Units (BPDUs) are the frames that are exchanged between physical switches as part of the Spanning Tree Protocol (STP). STP is used to prevent loops in the network and is commonly enabled on physical switches. When a link on a physical switch port goes up, the STP protocol starts its calculation and BPDU exchange to determine if the port should be in forwarding or blocking state. Bridge Protocol Data Unit (BPDU) frames exchange across the physical switch ports to identify the Root Bridge and form a tree topology. VMware’s vSwitches do not support STP and do not participate in BPDU exchanges. If a BPDU frame is received on a vSwitch uplink, that frame is dropped. Likewise, VMware vSwitches do not generate BPDU frames.

What are the disadvantages of use LAG with vSphere Storage traffic?

iSCSI traffic: vmkernel port binding is much better to aggregate uplinks with iSCSI traffic. Gives options to use RoundRobin, Fixed and MRU) NFS: Bandwidth for each NFS export limited to a single uplink since the IP hash will always be the same. There is a way to change the IP hash result by having different IP address at the NFS Array that would result in a different IP hash ending. Adds unnecessary complexity.

Most of these answers were copied from various internet sources to save time, including the glorious Wikipedia, and the ones regarding LACP and LAGs from Chris Wahls blog http://wahlnetwork.com/

After hours of research I found Chris blog the best source of explanations on multiple specific network configurations on vSphere environments and I suggest you check out his page on work around NFS on vSphere, LACP and LAG impact, vSphere Distributed switches and lots of other cool stuff.

Other resources I used were Pluralsight courses , Network+, CCNA, OSPF and other great stuff from there.

Also IBM redbooks were a great resource since I’ve read way to many of them and here is an excellent diagram from one these books (I lost the link will update when I find it): 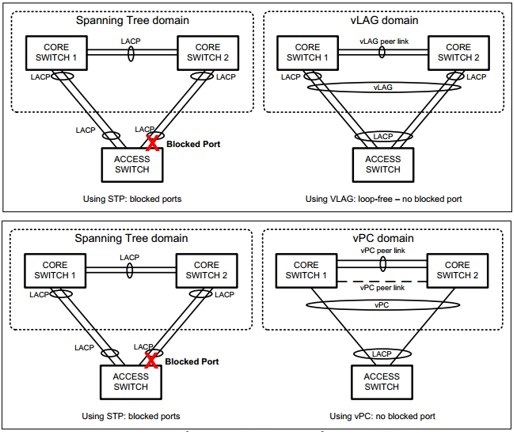 Of course most of each book will include information about specific IBM technologies but there are really good explanations on lots of basic things hidden in there.

Also these links helped me immensely:

As for vSphere related technologies you need to know most of it on a deep level:

Back to Skill Update